Sprinkler fire system or automatic showers is a fire suppression system that consists of a set of equipment distributed along a hydraulic network that uses pressurized water as an extinguishing agent. Its infrastructure is built with black or galvanized carbon steel piping and CL10 connections with BSP thread. 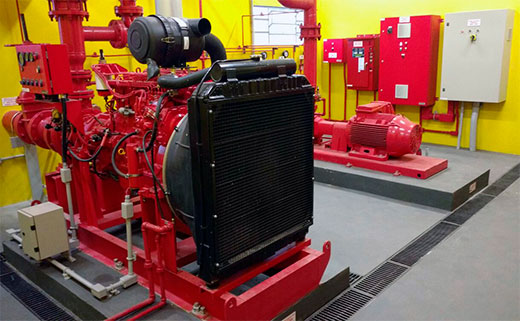 Sprinkler fire system is a fixed and automatic fire suppression system, that is, it acts without human intervention. When detecting a fire source (due to the rise in temperature) it activates the sensing element in the sprinkler nozzle, releasing water at the appropriate density for the control and extinction of the fire, ensuring that the combat is carried out automatically, quickly, effectively and economic, minimizing interruptions, preserving the company’s lives and assets.

During implementation, the sprinkler nozzles are strategically distributed and installed from the horizontal and general supply networks that connect the hydraulic system to the pump house and the reservoir, supplying water and maintaining the adequate pressure and flow of work for the control and suppression fire outbreaks.

To monitor the sprinkler network, flow switches are installed for signaling in the fire alarm center, ensuring that the system is supervised 24 hours a day by means of electronic fire detection and alarm systems (SDAI) that will signal the accident and will allow the evacuation of the site in a safe and organized manner.

Fire sprinkler systems designed and installed by SMH SISTEMAS fully comply with the standards of ABNT, NFPA 13 – Standard for the Installation of Sprinkler Systems, Technical Instructions of the Fire Department and FM Global Insurance.

For buildings in common use, such as shopping malls, commercial buildings, logistics centers etc. Sprinkler fire system operates with the piping flooded with pressurized water, obtaining a quick response for the control and fire suppression, right after breaks of the ampoule(bulb) of the sprinkler nozzle, releasing the water at the fire source. 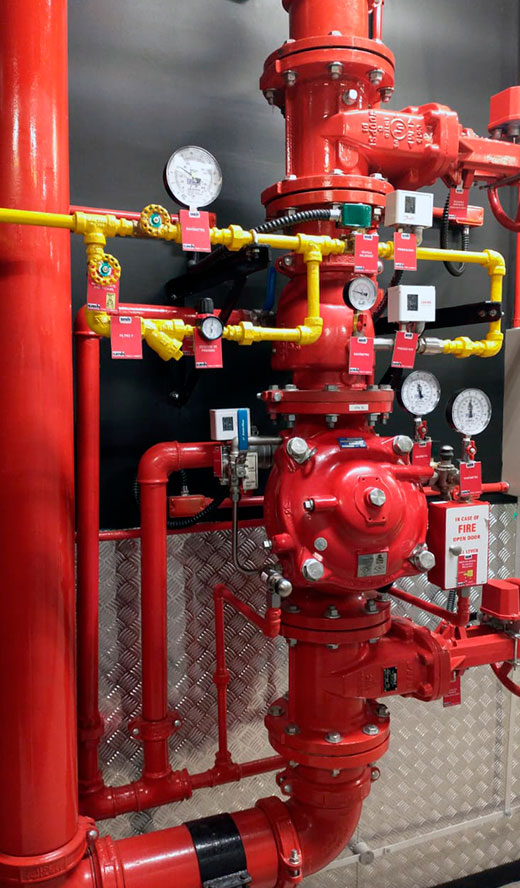 Sprinkler fire system with dry piping / pre-action is used in buildings or environments with special risks, which require a differentiated treatment with regard to automatic fire suprression due to existing equipment, high-value assets, collections or documents.

SMH SISTEMAS designs and installs fire sprinkler systems that remain with the piping above the dry pre-action valve set, that is, without water, only occupied by compressed air or nitrogen.

Sprinkler fire system with pre-action valve necessarily requires fire detection and fire alarm systems that automates the opening of the pre-action valve, releasing the water passage to flood the sprinkler network pipes after the detectors smoke come into operation, and water is discharged at the necessary pressure and flow at the source of the fire after the burst of the bulb / vial of the sprinkler nozzle, carrying out the control and suppressing the fire.

By adopting a pre-action sprinkler fire system, it is avoided that the sprinkler nozzles are activated accidentally or improperly, which could cause loss, damage or interruption of the operation without a fire actually occurring.

The pre-action sprinkler fire systems can be single interlock or double interlock, that is, the network will be flooded only with the activation of a smoke detector or by two smoke detectors, forming the crossed loop. This increases the security that the system will only come into operation if an accident is in fact occurring, which cannot be extinguished manually by the fire brigade.

SMH Sistemas® serves the entire national territory with its own highly specialized team.